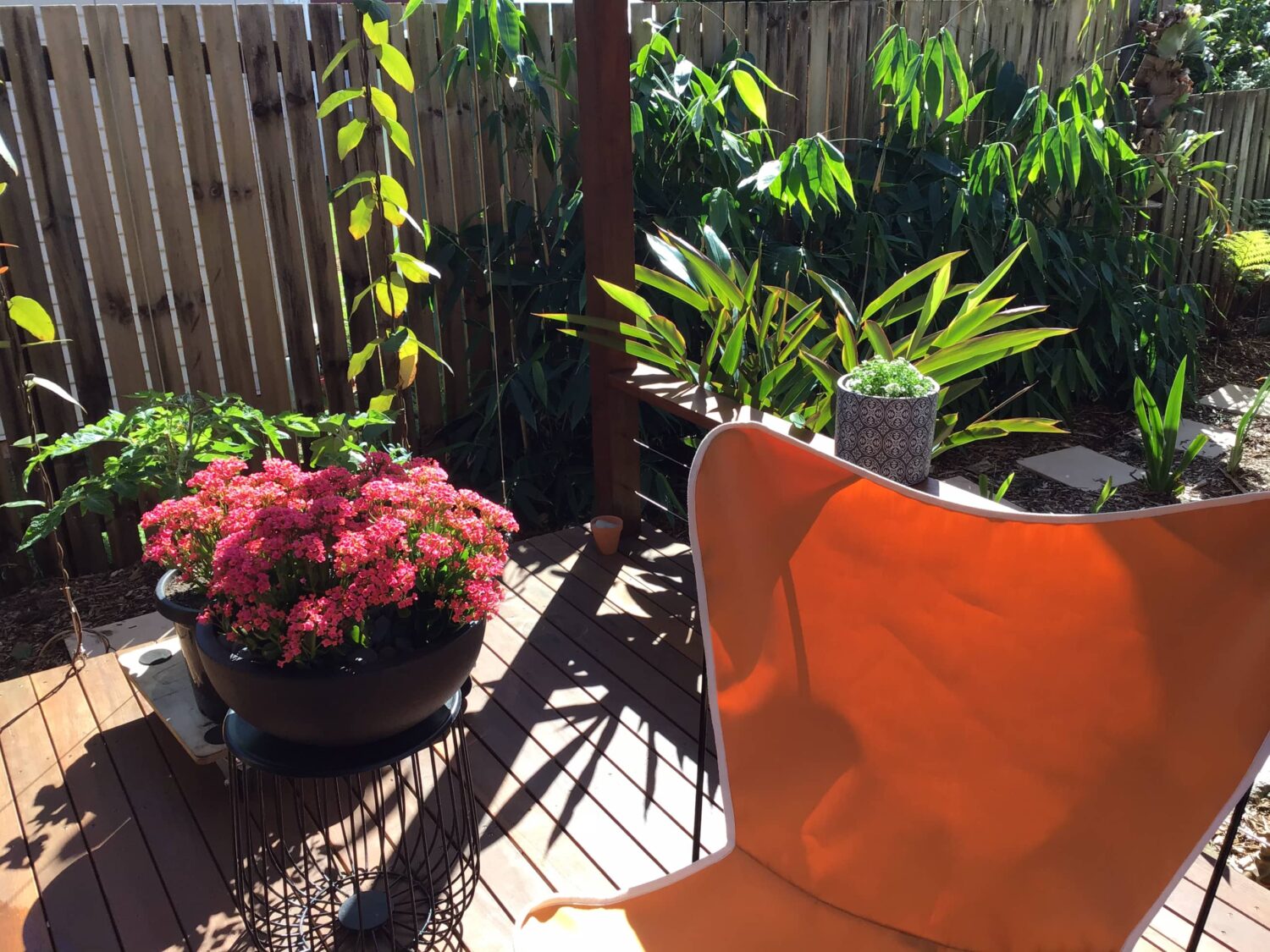 I have completed a PDC through Northey Street City Farm in 2019. I am enrolled to start a “Beyond Permaculture” Implementation and Management, in June this year.
The plan for this property was always to incorporate sustainable, relaxing, workable and productive gardens in the overall plan. The house and yard must work in tandem and compliment each other as well as being a practical assess to the solar passive design of the house. The two were, and continue to be planned concurrently.

There are six specific garden zones which surround the house on all four sides and one with in the house. The internal garden atrium houses tropical plants and ferns and gives off clean breathing air in the home and works as a thermal chimney from two bathrooms and the main corridor in the house.

The second zone is the north facing relaxation and water garden which lies between the studio and the al fresco area of the main house. It also serves as a native bee and amphibian habitat.

The third zone to the right of the covered walkway and out from the carport, is a general service area where clothes are dried on a retractable line, the worm farm and one of two compost bins lives as well as some herbs and a small storage shed and potting station. I grow most of my produce from seed. The rear entry gate is also here.

The fourth zone is edible wicking bed/ food forest zone. This lies on the eastern side and houses the fowl shed and 4 lovable chooks called Soup, Satay, Stew and Pie to remind them to behave. The wicking beds have frames and are covered with mesh to deter the chooks and allow them to free range in this gated area. It runs the eastern length is the house. Also in this zone, against the side of the house, I have planted native ground covers, small shrubs and grasses to provide safe passage for the blue tongue lizards which are endemic to this area and all too frequently predated upon by cats etc. It also provides habitat for other reptiles, small grass seed eating native birds and acts as a general wildlife corridor down the side of the house. I have incorporated a number of hollow logs in this corridor to offer shelter also. There is also a larger garden shed for garden tool etc and the second compost bin in this zone.

The fifth zone lies at the front of the house when the main entry is. It faces south west and is terribly hot in summer also given the bitumen road out front. I have created what is essentially an arid area that generally requires little watering. Those few plants that will need a bit of extra watering, will be serviced by one of the three 2,500 tanks situated toward the front of the house. The desert look of the front garden also lends itself to the midcentury appeal.

The sixth and final zone is the infrastructure zone is on the western side of the house which really cops the sun in the summer months. This is where all three water tanks, air conditioning condensers, the heat pump hot water tank and the solar inverter live. This is the lower side of the house and all the guttering is protected by metal leaf guard mesh. Between the various storage units, I have planted native shrubs for shade but been done thoughtfully in relation to height, habit, bird and pollinator attracting and insect repellent properties.

The tanks all have pumps to facilitate irrigation when required. There is no grass inside the fence line. The ground is covered in forest mulch many times over. This serves to reduce my workload but more importantly, it improves the soil structure, encourages mycilial growth within the soil and serves for moisture retention and so reduced watering. BTW the chooks love scratching it up as well!