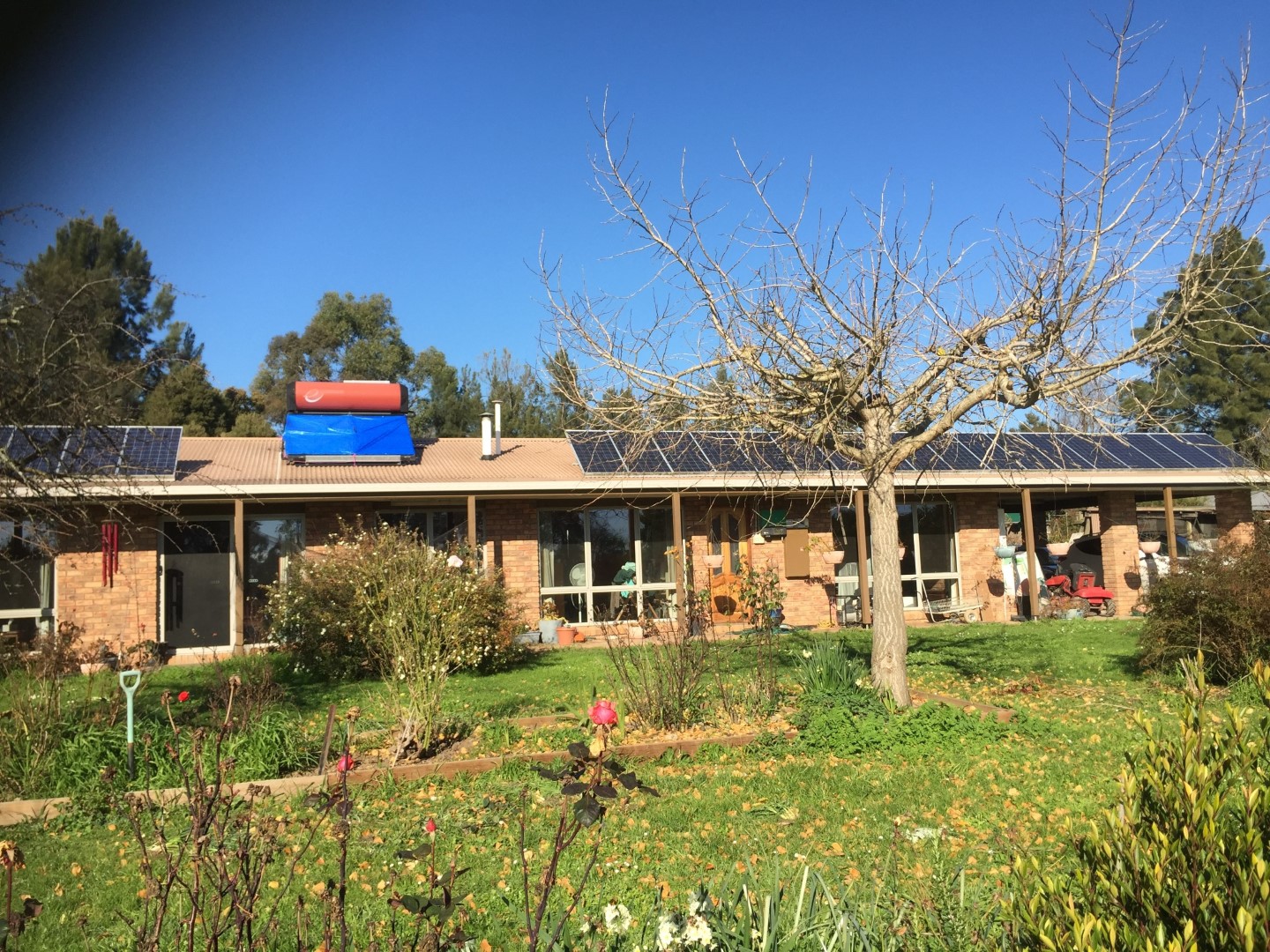 Designed for energy efficiency 30 years ago by the owners having had a long interest in energy efficient housing and having climate change in mind and having listened to Dr Graeme Pearman from CSIRO being interviewed on the science show on ABC radio, we purchased a 4 hectare block of land and unlike the norm, instead of the house facing the road we ran the house east west so the house faced north with a large area of glazing which gives solar gain in winter but having put on a 1200mm wide eave to the north which cuts out the sun mid spring till mid autumn.

Although this is currently not the standards of NatHERS it allows for climate change and means we currently do not use cooling in summer other than occasional fan and heating is provided by a wood heater and we only use 1.5 – 2 cubic metres of wood per year. We initially had an electric water heater but when we looked at the energy consumed, changed to a solar hot water system that used glycol heat exchange to allow for the fact of frosts. Although this system used less electricity we were always using electricity and never had very hot water. We have now installed a Sanden heat pump hot water system and always have hot water and use less electricity.

We have 4.9 kW of of solar panels installed which were first in 2009 with others over the next 2 years. We were running a production and retail nursery from our home and using 30 plus kWhs per day initially but reduced the usage to 10.5 per day by efficient pumps irrigation and inside our home.

The lighting in the house is fluorescent tubes individually switched and these are being replaced by led lighting.

Appliances have been selected for energy efficiency, all windows have heavy drapes and pelmets.
We grow most of our own fruit and vegetables and preserve around 200 bottles of fruit and tomatoes each year. The orchard consists of 49 trees and we also often produce our own meat.

When we purchased the property the only tree on it was a weed which we removed and subsequently we have planted several hundred trees both on our land and on the side of the road which attract many native birds and provides a habitat for many to live in.

We had a Scorecard assessment carried out in mid 2017 along with a blower door assessment, this encouraged us to better seal our home and increase the insulation in the ceiling and to have A C ceiling fans installed. The air leakage is now down to six and a half air changes per hour, and we are working on decreasing that . Scorecard did not allow for the insulation in the walls as it could not be seen and as the house is 30 years old we no longer have documented evidence to provide.

This house achieved 10 stars with the Victorian Residential Efficiency Scorecard. If you would like to find out more click here.

We believe that Scorecard should be compulsory for all homes being sold as it shows the energy efficiency of a dwelling.

Join the BBSN Bus Tour to visit this and 3 other homes open for Sustainable House Day. Ticket includes tour’s, lunch and transport.

This home is supported by