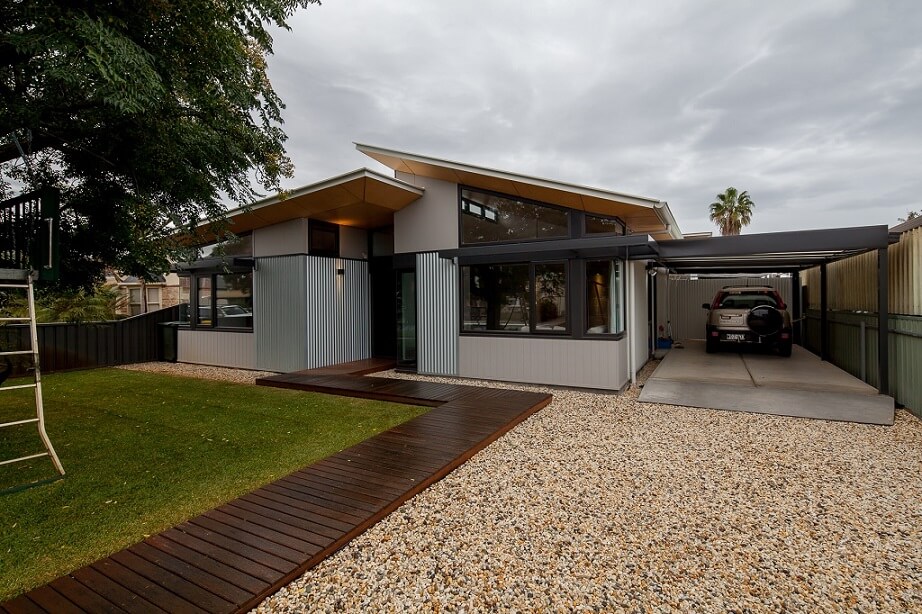 The Passive Resistance House features a combination of lightweight timber construction and reverse brick veneer, Axon Scyon cladding and colorbond corrugated iron, with a few zincalume panels on the front.

We have polished concrete to all rooms except bedrooms, which are carpeted, and in-slab hydronic heating with slab-edge insulation (low-insulation carpet underlay in bedrooms to permit heat transfer).

The windows are double-glazed with UPVC frames to all windows except corner windows, which are 12mm single-glazed with clear low-e. Kingspan Aircell insulation wraps the building. Plywood is used as a ceiling lining, with expressed shadow joints extending out to soffit.

The 10,800L rainwater tanks are plumbed into every tap in the house. Every drop of rain that falls on the block stays on the block.

There is ironbark timber decking. We were unhappy with Kapur alternative due to its sourcing from old forests in Indonesia.

The internal courtyard receives northern sunlight into the back section of house. All except two lights in the house are LEDs.

A community garden, tree house and swings have been installed at the front of the house and a newly added beehive.